Some of these are really funny!

Stroke has a new indicator! They say if you forward this to ten people, you stand a chance of saving one life. Will you send this along? Blood Clots/Stroke – They Now Have a Fourth Indicator, the Tongue:

During a BBQ, a woman stumbled and took a little fall – she assured everyone that she was fine (they offered to call paramedics) …she said she had just tripped over a brick because of her new shoes.

They got her cleaned up and got her a new plate of food. While she appeared a bit shaken up, Jane went about enjoying herself the rest of the evening.

Jane’s husband called later telling everyone that his wife had been taken to the hospital – (at 6:00 PM Jane passed away.) She had suffered a stroke at the BBQ. Had they known how to identify… Highlands-based Defense Region Command of the West Papua National Liberation Army, or TPNPB. Photo: TPNPB
Three people died after gunmen targeted an aircraft transporting Indonesian paramilitary police at the airport of this remote Papuan regency.
Liberation Army gunmen launched an attack at the Trigana Air twin otter which had arrived carrying 18 Brimob personnel.
Two people, including the pilot, were injured before a gunfire ensued on the airfield between the Liberation Army members and Indonesian security forces.
Three people who died have been identified as migrants from Indonesia’s South Sulawesi province.
The Liberation Army said it was responsible for shooting the three people, including a boy, saying he was hit by a stray bullet.
“The shot was targeted at the child’s father but the boy panicked and hugged his father and was hit by a stray bullet on his cheek,” a Liberation Army report said.
The boy’s parents were the other two killed in the violence. They were migrants from South Sulawesi who, according to the Liberation Army, had been established traders in Nduga’s township.
A spokesperson for the Liberation Army and the Free West Papua Movment, Sebby Sambom, said their soldiers shot at the man bcause he had pulled out a gun.
“The person from Sulawesi, he took position holding a pistol and tried to shoot the Liberation Army, Free West Papua group… soldiers… That’s why the Liberation army shot him Then his wife and son they came and held him. Then his wife was shot…”
The spokesman suggested that the child’s death was entirely accidental. However, he alleged that many people from other parts of Indonesia who had come to live in Papua were undercover, intelligence agents assisting Indonesia’s security forces in operaions against Papuans.
“We always identify them, we have data,” Mr Sembom explained.
“Some Indonesian civillians become businessmen, but they are Indonesian intelligence agents. Indonesian soldiers and police give them small stores or trade house buildings. They’re everywhere.”
Meanwhile, the attack on the aircraft transporting the paramilitary personnel has been linked by Indonesian officials to the regional elections taking place this week. The paramilitary police had been transported from the Highlands town of Wamena to Nduga to provide security during the elections.
Indonesian officials said that despite the attempt to disrupt the elections, they have been conducted peacefully. However, tensions remain high in Nduga amid bursts of gunfire that have broken out sporadically after the Army dispersed from the airfield following the deadly gunfight.
Nduga is in the Highlands region where the Liberation Army has launched several attacks since last year. Two TNI personnel were killed there last December, prompting reprisal attacks which left two civilians dead and a church burnt.
Around the same time, the Liberation Army declared a general mobilisation of all its soldiers in Papua to carry out operations against the Indonesian state and what it called “the invaders”.
As well as independence, the Army’s stated goal has been to close the Freeport mine, which is one of the largest sources of revenue for the Indonesian state.

Gibb is the last surviving member of the fraternal trio whose falsetto harmonies and disco beats powered huge 1970s hits. 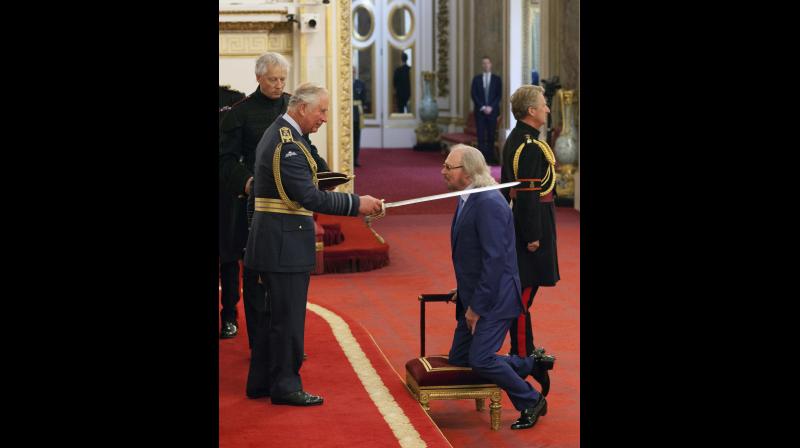 LONDON: Bee Gee Barry Gibb has received a knighthood at Buckingham Palace, and says he hopes his late brothers Robin and Maurice are proud of him.

Gibb is the last surviving member of the fraternal trio whose falsetto harmonies and disco beats powered huge 1970s hits including “How Deep is Your Love,” ”Stayin’ Alive” and “Tragedy.” Maurice died in 2003 and his twin Robin in 2012.

After being knighted at the palace by Prince Charles on Tuesday, the 71-year-old songwriter said: “If it was not for my brothers, I would not be here.”

Gibb, who can now call himself Sir Barry, said the honor was “a bit surreal.”

He said “it is a high award that your culture can give you and that is something I am enormously proud of.

The grounds of Mona Vale were once the most beautiful and well kept paddocks on the farm at Riccarton.  In a move that would later grieve the Deans family, this land with its ‘…splendid river frontage…’ was sold in 1899 for £100 per acre.  Riccarton House had grown too small for all thirteen occupants and the new homestead out at Homebush (Darfield) had yet to be paid for.  The difficult decision was made to sell off some land.

The four acres that became the first part of what we now know as Mona Vale was first purchased by Frederick Waymouth who named his new property ‘Karewa’. He had the beautiful homestead built.  Just a short five years later, he sold the land onto Mrs. Annie Quayle Townsend, a widow believed to have been New Zealand’s richest person at that…

The Kennedy family kept a secret for a very long time. This was the fact that Rosemary Kennedy underwent a brutal lobotomy that was botched, in the end, she could not walk or even talk.

Rosemary Kennedy Had a Botched Lobotomy so JFK Could Succeed

The Kennedy Family Had Plenty of Skeletons in the Closet

While most people attribute the fame of the Kennedy family to JFK and wife Jackie, the family was well known before John took over as president. The Kennedys started with a businessman from Boston with the name of Joe, along with Rose, his wife. They built up a family of nine and out of these three went on to go into politics.

Mostly, they became the United States equivalent of the Royal Family in the United Kingdom. People of the U.S watched their every move, but just as with any conventional family, they had skeletons in the closet.

Rosemary Kennedy was born into the Kennedy family in 1918, the third child. The birth of Rosemary was not without incident, as her birth was held back waiting for a doctor to arrive. These actions affected the child badly as she suffered lack of oxygen, which caused brain damage and mental deficiency. Rosemary could not keep up with her brothers and sisters and she was left out of play a great deal. Rosemary suffered fits due to her mental illness.

During the 1920s, mental illness was stigmatized; it was something not talked about as it is today. Rose took her daughter out of mainstream school over fears of repercussions and a tutor was hired with Rose being taught from home. Rose was sent away to boarding school, as opposed to being institutionalized.

When Joe was named the ambassador to the Court of St. James, the family moved to England to be presented at court and Rosemary went along with the rest of the family. Her disabilities were hidden away from the public, with no one realizing the true extent. Rosemary spent time in a Catholic school and she began to flourish. Things might have turned out differently for Rose had the family remained in England but in 1940 they had to return to the United States when Germany marched into Paris. The education and progress of Rosemary were abandoned.

Joe put his focus into his eldest boys, as they were moving into a career in politics. However, he worried that Rose and her condition might have a bad impact on the family and their political career. He looked into anything that might help Rose and the answer seemed to be with Dr. Walter Freeman. Freeman along with Dr. James Watts was working on a procedure said to be able to cure mentally disabled people and this procedure was lobotomy.

Despite Kennedy Knowing Lobotomy Came With Risks, It Was Undertaken

Lobotomy at that time was said to be the “cure-all” and physicians were recommending the procedure. While there was a lot of excitement about the results of the procedure there were some warnings, the procedure could also be destructive. Some said the procedure left people the same on the outside but changed on the inside. This did not deter Joe, who saw a lobotomy as the last hope for Rose.

When Rosemary Kennedy was 23 years old, in 1941, she underwent the lobotomy. The operation saw her having two holes drilled into her skull and metal spatulas inserted. The idea of inserting spatulas was to “sever any link between the pre-frontal cortex and the remainder of the brain”. Rosemary was awake throughout the procedure and asked to recite poems to the nurses. They knew the procedure was complete when Rose stopped talking.

Rosemary Was Left Unable to Walk or Talk

It became apparent straight away that something had gone wrong with the lobotomy of Rosemary Kennedy. The operation had left her unable to walk or even talk. Sadly, Rosemary was taken to an institution undergoing many months of physical therapy before finally gaining some movement in one arm. Rosemary was essentially cast out of the Kennedy family. She remained in the institution for 20 years. It was only when Joe had a stroke that Rose went to visit her daughter. Rosemary was unable to express herself in any other way when told about her father’s stroke, attacking Rose.

Kennedy Family Went on to Champion Rights for the Mentally Disabled

During their later life, the Kennedy family began to champion rights for mentally disabled people, perhaps feeling guilty about what had happened to Rosemary. John F. Kennedy became president of the United States and signed the “Maternal and Child Health and Mental Retardation Planning Amendment to the Social Security Act.” The sister of Rosemary, Eunice Kennedy, in support of the achievements of the mentally and physically disabled, also founded the Special Olympics in 1962.

Rosemary Kennedy was finally reunited with the family who had estranged her and lived out her life in residential care in Jefferson, Wisconsin. Rosemary passed away in 2005.