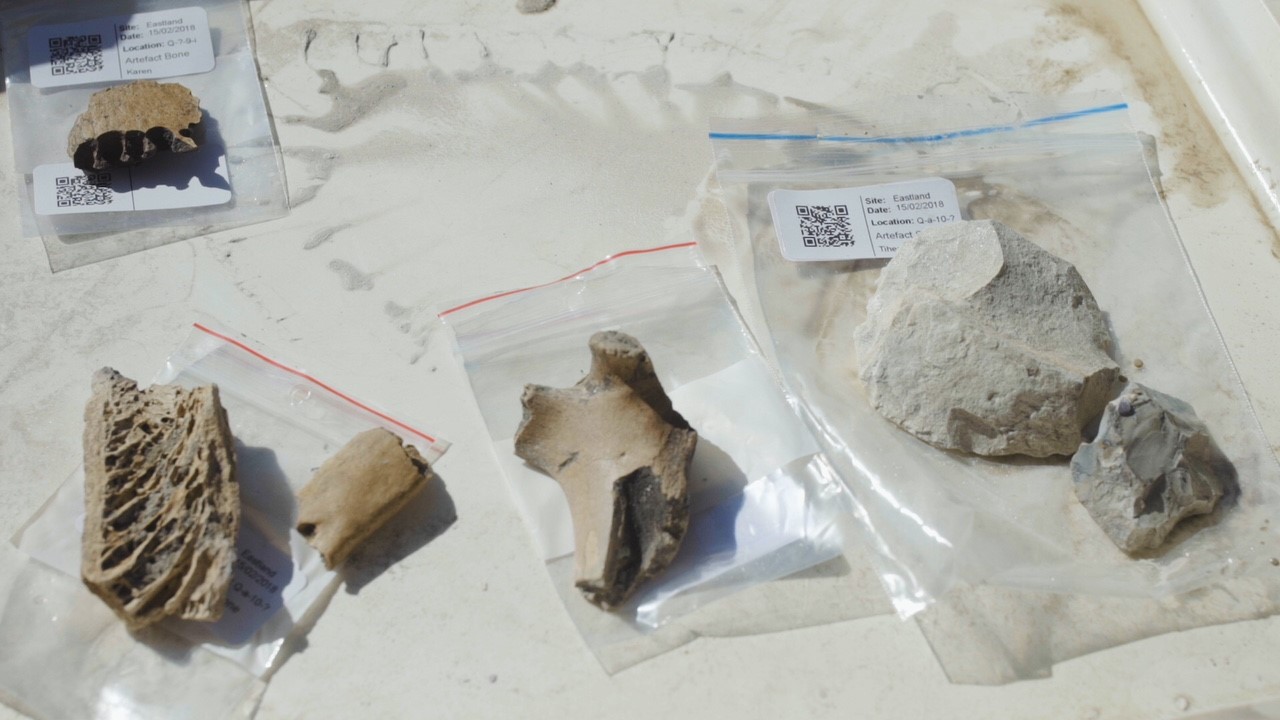 EXCITING DISCOVERY: The excavation site at Eastland Port — just past The Works carpark — is where remains were found from the outskirts of a Maori village dating back to the 14th century. The deepest part, about 2.5 metres underground, was where the oldest artefacts were found. Professor Richard Walter said they excavated an area of several hundred square metres to find remnants from the old Maori village and then further excavated the area under cover. Pictures by Cinema East

The peripheries of a 14th century Maori village have been uncovered by a group of University of Otago archaeologists at Eastland Port in Gisborne.

Moa bones and other food items, fish hooks manufactured of moa bone and stone tools of obsidian and chert were among the findings in the 2.5 metre-deep excavation.

The obsidian (volcanic glass) was used by early Maori settlers as simple cutting tools. The materials found are estimated to date back to the early 1300s.

Eastland Port was granted an archaeological authority by Heritage New Zealand in 2016 to develop the wharfside log yard.

The archaeological work was carried out by the university’s Southern Pacific Archaeological Research unit and conformed with tikanga Maori protocols agreed to by the port with Ngati Oneone.

University of Otago professor of archaeology Richard Walter says uncovering the site was significant from a scientific and cultural perspective.

“We don’t know as much about early occupation around this part of the coastline as we do in other parts of the country. There are not many of these very early sites, so this one is filling the gaps.”

They found evidence Maori here were trading with the South Island. Materials from Nelson and Cook Strait were found.

The area has a significant history as the first landing place of waka (canoes) that carried Maori to the district and the first contact between Maori and explorer James Cook in 1769.

Professor Walter says given the amount of material found at the site, the chances of finding a village within the vicinity are quite high.

This was a special case and Eastland Port had generously funded excavation in the interests of science and research.

“So it was important we carry out an excavation beforehand.”

Opportunities like this, to excavate and preserve anything found tended to be few and brief, he said.

“Given the port’s location, we take the protection of these significant sites within operational areas very seriously.

“This process has given us all an unprecedented chance to peek beneath the surface.

“Following the archaeological authority process, the site has now been covered over with confidence that it’s reasonably well understood, well protected and has contributed to our advancing knowledge of the past,” says Mr Gaddum.

The archaeological work was carried out by University of Otago archaeologists and conformed with tikanga Maori protocols agreed to by the port with Ngati Oneone.

“This really is a great example of the archaeological consent process working well, where all the groups involved have been working together to get the best possible outcome for this very important place,” says Heritage New Zealand Pouhere Taonga’s director regional services Pam Bain.

The artefacts and faunal remains are being analysed in the Otago archaeology laboratories, before the process begins to return them to their rightful owners.