Warnings about the consequences of water depletion were ignored.

Or so the reports say.

I doubt that the politicians in Cape Town simply didn’t listen.

More likely, they don’t know how to cope with this problem.

It is quite daunting.

Their engineers know all that, and their politicians have been listening to them and looking at the data.

What I mean is that human overpopulation will overtake their efforts to manage and control this problem.

With more humans living there than there were 311 years ago, which is how far apart scientists say a drought of this severity occurs there, and no population policy in sight, let alone discussed, this crisis was guaranteed. That number is roughly 3,766,000. (http://worldpopulationreview.com/world-cities/cape-town-population/)

Residents are on rations of water – down to just enough for a 4-minute shower per day, and they get it in bottles that they bring to guarded collection points. That’s 50 liters a day, down from 87 liters a day. There is no water left over for that 4-minute shower (if they even have running water, which many do not). Those liters of water are being used as drinking and cooking water first and foremost, and then perhaps to wash cookware and persons. 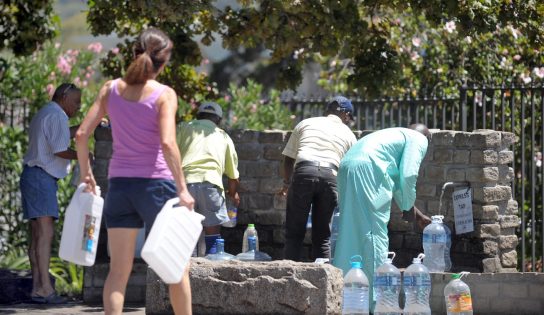 Businesses will use chemical toilets and asks employees to bring their own water to work.

I wonder how that will play out. Will people be mugged en route and robbed of their personal supplies of potable water? That seems likely.

It’s the warm season there, but Cape Town has winters. The people there can’t just melt and use snowfall, however; the lowest temperature in winter there is 47 °F/8.5 °C.

I’m just trying to imagine what this is like. It’s anything but pleasant.

Water to poor townships, schools, hospitals, and the business district will not be shut off. At least, that’s the current plan. Plans can change.

Under discussion is the idea of storing water at military installations and having it handed out, because desperate hordes of humans tend to overwhelm water supplies without such measures.

People are unlikely to stay where they are if they don’t have enough water.

Those with motor vehicles will likely leave first, and poorer people will go on foot if they have to.

Where will they go? There are other cities in South Africa. There is also the countryside. Imagine almost 4 million people relocating rapidly.

If you have any trouble doing so, just recall what happened when millions of migrants walked into Europe last year and the year before.

This crisis will be repeated elsewhere in the world. Count on it.