Murder in the Sounds:

A NZME investigation and podcast series

Bobbing in the waters of Waikawa Bay, is the scene of the crime.

Painted white and brown, 26ft long, with a single mast jutting into the skies above Picton.

To the locals walking their dogs along the shore, or kids fishing from the jetty, there’s nothing to distinguish the steel-hull sloop from the dozens of boats moored nearby, or tethered in the marina.

Just another yacht owned by a sea-loving local.

But to utter its name, Blade, evokes memories stretching back to New Year’s Eve 1997.

The friends were among revellers at the century old lodge on the edge of Endeavour Inlet, which has no road access.

As the party wound down in the small hours of New Year’s Day, there was no room for the friends to sleep on the Tamarack, a yacht chartered by Olivia and her sister Amelia.

Other “freeloaders” had taken their bunks, so Ben and Olivia were anxious to get back to shore and find somewhere else to sleep.

A fiery crash in the US has destroyed enough avocados to put a deposit on an Aucklander’s first home.

About 18,000kg of avocados were thrown across a Texas highway on Friday (local time) after the truck carrying the produce crashed and caught fire, ABC News reports.

The crash happened on Thursday (local time) on a southbound lane of Interstate 35E near Forreston, US broadcaster WFAA reports.

Firefighters were called to hose down the 18-wheel big rig, as it went up in flames. The crates of destroyed produce were said to be worth about NZD$70,000.

Traffic was backed up on the highway for several hours.

The cause of the accident has yet to be confirmed. Nobody was injured in the incident, except the tragic loss of life of many avocados.

There’s no word yet on whether there will be a guacamole shortage as a result of crash.

THE MORIORI GENOCIDE
WHO ARE THE MORIORI?
The Moriori are the indigenous people of the Chatham Islands. They were Maori Polynesians that settled in the islands from New Zealand in the 16th century. The Moriori consisted of a small population, with its highest number of inhabitants being 2000 at their peak. They lived by the law of Nunuku, a code of non-violence and passive resistance, banning warfare and cannibalism. 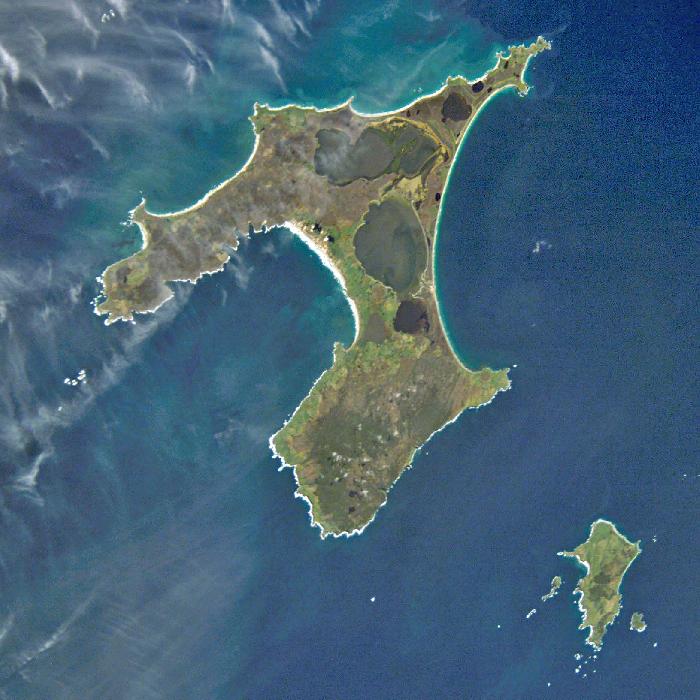 The Chatham islands from space
CAUSES OF THE MORIORI GENOCIDE – WHAT IS IT?
“We took possession… in accordance with our customs and we caught all the people. Not one escaped…..”
– A Māori conqueror:
The Māori were in search of resources and new territories to conquer. Hearing of the peacefulness of the Moriori, they set their sights on the Chatham islands.
“Parties of warriors armed with muskets, clubs and tomahawks, led by their chiefs, walked through Moriori tribal territories and settlements without warning, permission or greeting. If the districts were wanted by the invaders, they curtly informed the inhabitants that their land had been taken and the Moriori living there were now vassals.”
“[The Maori] commenced to kill us like sheep…. [We] were terrified, fled to the bush, concealed ourselves in holes underground, and in any place to escape our enemies. It was of no avail; we were discovered and killed – men, women and children indiscriminately.”
– A Moriori survivor 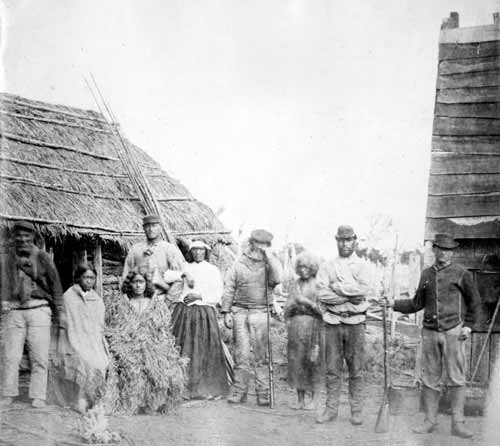 THE EIGHT STAGES OF THE MORIORI GENOCIDE
While many of the 8 stages of genocide apply to the Moriori genocide, this event occurred in the 19th century between indigenous peoples. Because of this, several aspects of the stages may not be applicable – for example, the broadcasting of hate propaganda. In addition, the stages and the things that transpire during each stage may be in a different order.
A ritual involving staking out woman and children on the beach and leaving them to die in great pain over several days; forbade speaking of Moriori language; forced Moriori to desecrate their sacred sites by urinating and defecating on them. After the invasion: Moriori were forbidden to marry other Moriori or have children with each other. They all became slaves of the invaders. Many Moriori women had children with their Maori  masters. Only 101 Moriori out of a population of about 2000 were left alive by 1862
Read much more:
https://infogram.com/the-moriori-genocide-1g143mn34x53pzy

The Bridle Path symbolizes a lot of different things to many different people.  As a Canterbury historian, my heart jumps in my ribcage every time I see it and I am not even a descendant of a family that walked over it 150 years ago.  My British parents and older brothers would make the same journey 115 years later but had the comfortable Lyttelton Railway Tunnel to deliver them into Christchurch and their new lives.
For the Canterbury Association’s Chief Surveyor, Captain Joseph Thomas, the Bridle Path would have symbolized disillusionment, bitter disappointment and an anger that would take years to dissolve.  No can say whether he glared back at Lyttelton with its Bridle Path on his way back to England after being dismissed – but I know he left New Zealand with a broken, heavy heart and was destined to become the most forgotten man in Christchurch’s history.
Stepping back to 1849, Captain Thomas and his group of surveyors stood on a beach of one bay of Lyttelton Harbour (Rapaki I believe) and dared to dream – they were there to build the foundation of a future settlement.  The words of the Canterbury Association must have rung in Captain Thomas’ ears during those first few months: he would become the Chief Officer once the surveying was all done and he would be known as the founder of Canterbury!
With only £2000 to play with, Captain Thomas had to choose his projects carefully.  He chose to build a jetty, immigration barracks, an Association store (in Sumner) and a route from the port to the plains was urgent.  His road gang – made up mostly from Maori and ex-convicts – began to construct the Sumner Road, carving a track into the side of the harbour wall.  Progress was slow and expensive.
Whatever thoughts of grandeur Captain Thomas had for himself was popped when John Robert Godley arrived in Lyttelton in April 1850.  Assigned as the Association’s Chief Officer (the job promised to Captain Thomas), Godley halted all projects, fired the survey team and blamed Thomas for the debt that the settlement had slipped into.  The disagreements between these two men became so fierce that Godley left for Wellington soon after, only to return with the arrival of the First Four Ships.  This didn’t bring Thomas any further peace as he had begun to lose the trust of his team and many at one time or another refused to work with him.
This was written by surveyor Charles O. Torlesse on the 20th September 1850:
“You know what a strange person Thomas is; and though Boys and I received a handsome testimonial from him on the occasion of our discharge he has followed up the injury of disappointing us by constant snubbing and insulting conduct.  However, we have restrained ourselves, taken everything quite coolly, and been careful to give him no cause offence.  I should indeed be nervous about getting further employment under him…”
In September/October 1850, Godley sent Thomas a further £2400 to build an Association store in Lyttelton and to make the Sumner Road passable for pack horses if possible.  If not, a new track was to be made over the Port Hills to the plains.
The Bridle Path was born.  The name speaks for itself.
And so it came to pass.  On the 16th December 1850, the Charlotte Jane sailed into Lyttelton Harbour after 3 months at sea.  As the first pilgrims took to the Bridle Path, it wasn’t even completed.  By early 1851, the track was finished and widened.  Not surprisingly, others saw great business opportunities around the path – a Ginger Beer stand was erected at the summit, and a daily cart and horse service opened.
One settler commented that the crossing of the Bridle Path was the last of the mental force fields that the journey to Canterbury had been.  After 3 months aboard their ships, many of the pilgrims were in no shape to make the climb.  It proved too much for baker John Williams who was found dead in the dirt from a stroke.  The 41 year old had decided to make the first climb on his own to take a look from the summit before moving his family out of Lyttelton.  A passenger from the ‘Randolph’, he left behind his wife Isabella and their 7 children.
The Bridle Path continues to be quite a presence.  Today it is legally listed as a road (the first wheeled transport was a spring cart in 1857)and scattered along its length are memorials to the First Four Ships, Jane Deans, Emily Rose Jacobs and the most well known, the Pioneer Women’s Memorial Hut at the Summit.
*Photos of Bridle Path taken by Annette Bulovic*
*Black and white photo courtesy of http://nzetc.victoria.ac.nz*http://www.peelingbackhistory.co.nz/bridle-path-included-in-development-budget-october-1850/Originally published: 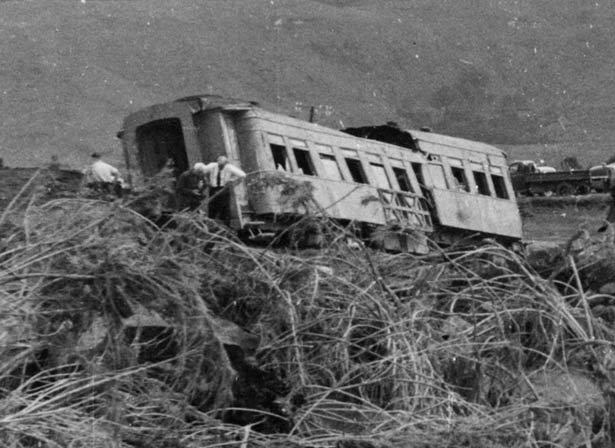 At 10.21 p.m. on Christmas Eve 1953 the Wellington–Auckland night express plunged into the flooded Whangaehu River at Tangiwai, 10 km west of Waiōuru in the central North Island. Of the 285 passengers and crew on board, 151 died in New Zealand’s worst railway accident.

It was, at the time, the world’s eighth-deadliest rail disaster and made headlines around the globe. The nation was stunned. With New Zealand’s population just over two million, many people had a direct relationship with someone involved in the tragedy.

The place name Tangiwai means ‘weeping waters’ in Māori. The timing of the accident added to the sense of tragedy. Most of those on the train were heading home for Christmas, armed with presents for friends and family. Those waiting to meet their loved ones at the various stations up the line had no sense of the tragedy unfolding on the Volcanic Plateau. Over the following days, searchers found many battered, mud-soaked presents, toys and teddy bears on the banks of the Whangaehu River.

Next: Page 2. Wrong place at the wrong time

When Queen Victoria died in 1901, the royal family tried to erase all evidence of her close 13-year friendship with a young Muslim clerk she called ‘the Munshi’.

It seemed they’d succeeded until journalist Shrabani Basu chanced upon the first clues to their close bond at a former royal holiday residence on the Isle of Wight.

Basu’s investigation of Karim and his relationship with Victoria eventually became a book, and this year the story is told in the film Victoria & Abdul, starring Judi Dench.

Clive and his wife Silvia were awakened at 3:30 am by a loud pounding on the door.Clive gets up and goes to the door where a drunken stranger, standing in the pouring rain,is asking for a push.

He slams the door and comes back for sleep.

“Who was that?” asks Silvia.

“Just some drunk guy asking for a push,”he answers.

“Did you help him?” Silvia asks.

“No, I did not, it is 3:30 in the morning and it is pouring rain out there!”Clive replies.

“Well, you have a short memory,” says his wife.”Can’t you remember about four months ago when we broke down,and those two guys helped us?I think you should help him and you should be ashamed of yourself! Lord loves drunk people too.”

He calls out into the darkness,”Hey,are you still there?”

“Yes” comes back the answer.

“Do you still need a push?” calls out Clive.

“Yes, please!” comes the reply from the darkness.

“Where are you?”asks the bleary-eyed husband.

“Over here on the swing set,”replies the drunk guy